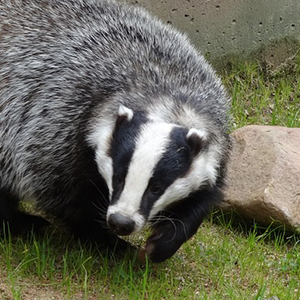 Badgers are notorious for having a bite that rivals their bark — despite their less-than-formidable size! Badgers have been known to fight animals as big as a lion! Related to weasels, badgers have a recognizable appearance and look somewhat similar to skunks. Badgers' digging habits can result in damage to your garden and lawn, which can sometimes be very expensive to remedy. Call Wildlife X Team® at (817) 431-3007 today to get rid of badgers!

What Problems do Badgers Cause?

Badgers are responsible mostly for landscape damage, including garden damage and lawn damage, which can become costly.

Badgers are excellent excavators, which causes most of the problems to humans. They will dig under fences, in your garden, and around your home. They create tunnel systems with a den. They dig up to one burrow every day, which can wreak havoc on your home and lawn.

As with all wildlife animals, we do not recommend that you attempt to approach or handle a badger. Badger will usually run away from humans, but if they feel threatened, they are highly aggressive and will scratch or bite you.

Where do Badgers Live?

There is only one species of badger that lives in the United States, and it is the American badger. Badgers live in western United States and across the Great Plains of North America. They may also be found in central western Canada and in some areas of Mexico. They dig tunnels for their homes and insulate them with leaves and grass. American badgers typically live alone.

How do you Prevent Badgers?

How to Get Rid of Badgers

The most likely spot you will find badgers around your home is in your garden. Badgers don't usually cause an overwhelming amount of damage, but they are pesky to have hanging around. Signs of badgers in the garden include dug up spots in the beds, eaten foods or bulbs, and broken fences. If you're thinkging about how to get badgers out of your garden, there are a few options:

What Do Badgers Eat?

Badgers are in the Mustelidae family, which means they are carnivorous mammals. Other Mustelidae include weasels and otters. Badgers mainly like to eat bugs and grubs. They will also eat seeds, berries, eggs, rodents, and lizards. Grubs and worms make up about 80% of a badger's diet, but they aren't afraid to use their claws to dig up other treats!

Badgers do not often attack people, but they do bite as a form of self-defense. Badgers are carnivors and have large teeth because of it. Their long canine teeth are used to eat rodents, squirrels, and other small animals, so it's important to be mindful of them around your family and pets.

February is the top month for badger reproduction, although they will mate at any time of the year. The average gestation of a badger is 6-7 weeks. The average badger litter is 2 or 3 cubs. The babies will spend the first 2 months underground, then come out around April or early May.

Where Do Badgers Nest?

Badgers usually like dry grasslands, but some also live in the woods. Because they have strong claws, they will dig burrows and live in the tunnels they dig. A badger's home is calle a sett--like raccoons, badgers set aside a spot in their home as a bathroom, called a latrine. They leave all their droppings in one area. Badgers like to live close to each other in clans.

Badgers can be a nuisance in your garden and a safety threat to your family. To protect yourself from badgers, contact Wildlife X Team®. Call (817) 431-3007 today to get rid of badgers!

Offering
As Featured on These Networks & Affiliates
Affiliations:
About
Wildlife X Team is rapidly becoming the leader in the nuisance wildlife control industry. We lead the way in the development of technology, education, products and services in Wildlife Management.
Read More About Us
100% Financing
SuperMoney offers 100% financing up to $100,000 and 30 second approvals. You'll fill out one easy form and get competing pre-approved loan offers back in real time.
Apply Now
Wildlife X Team offers an exclusive Wildlife Inspection Report® which includes commonly overlooked areas where wildlife can enter and infest your home.
Project: Clean Gutters and Downspouts

Met all my expectations!