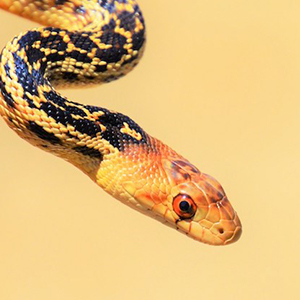 The terms venomous and poisonous are similar but different enough to warrant a distinction—venomous means that the damage is inflicted through a bite, and poisonous means it is transmitted through consumption. Thus, snakes are—for the most part—venomous. Many species of snakes are actually harmless, but it's a wise decision to avoid interaction with all snakes. Even if the snake is not venomous, it could still bite if it feels threatened by you or a pet. There are plenty of venomous snakes throughout the country, so read on to learn more about the snakes you might see! If you do spot a snake, find your local Wildlife X Team® by calling (817) 431-3007 today!

For some, the presence of snakes alone is enough for a call to a wildlife removal team. For the less panic-stricken residents, the threat of being bitten or pets/loved ones being bitten, potentially with fatal results, is certainly cause for concern. All snakes can disrupt homeowners' routines and/or cause damage, including curling up in warm spots on patios or porches to regulate their body heat.

Is Seeing Snakes Really a Cause for Concern?

As mentioned earlier, many snakes are not inherently deadly, but you still don't want to interact with them or have them on your property. Your local  Wildlife X Team® technician can help remove snakes and deter them from returning. Call (817) 431-3007 to speak with a trained professional from Wildlife X Team® today!

What Do Snakes Eat?

Where Are Snakes Found?

Snakes are very common in the Southern areas of the United States. Common snake types in Texas, Oklahoma, Louisiana, and Tennessee include:

Rattlesnakes are the most venomous snake in the South. They are also the most common snake in a lot of areas, specifically Texas.

The coachwhip is a slender, light brown snake. Coachwhip snakes kill and eat rattlesnakes, as well as birds, reptiles, and anything else it can manage to catch.

The cottonmouth snake, also called the water moccasin, is typically found in swampy waters. They like slow moving water. They can be a range of colors, from gray to black. Cottonmouth snakes are venomouse.

These snakes are found across most of Oklahoma. They love marshy or wooded areas, but you may still find them in urban settings. They are typically brown or gray.

The Texas Rat Snake is one of the most common snakes in Texas. They eat rats, mice, and birds. Their venom isn’t dangerous to humans, but they will still bite if given the chance.

The Hog-Nosed snake is common in East Texas. They eat insects, and will play dead if they’re threatened.

The copperhead snake likes to live in backyards and wooded areas, mainly in Central and East Texas. They often linger in cities as well. While their venom is danerous to humans, it's rarely deadly.

Coral snakes are small and slender, and, luckily for humans, have a difficult time getting their venom into it’s victim.

The Western Smooth Earth snake is found in the Eastern side of Oklahoma. They love wooded areas, and are active after a heavy rain. They are plain brow in color.

A quick way to gauge whether a snake is venomous or not is to check the shape of its head. Venomous snakes often have triangularly-shaped heads and have a defined neck. Their body shape is also plump in comparison to non-venomous snakes. Rattlesnakes, water moccasins, and cottonmouths are all venomous snakes.

Offering
As Featured on These Networks & Affiliates
Affiliations:
About
Wildlife X Team is rapidly becoming the leader in the nuisance wildlife control industry. We lead the way in the development of technology, education, products and services in Wildlife Management.
Read More About Us
100% Financing
SuperMoney offers 100% financing up to $100,000 and 30 second approvals. You'll fill out one easy form and get competing pre-approved loan offers back in real time.
Apply Now
Wildlife X Team offers an exclusive Wildlife Inspection Report® which includes commonly overlooked areas where wildlife can enter and infest your home.
Project: Install Spray Foam Insulation

This company's installation saved us hundreds of dollars this past winter and summer. They did a superb job and cleaned up after themselves.