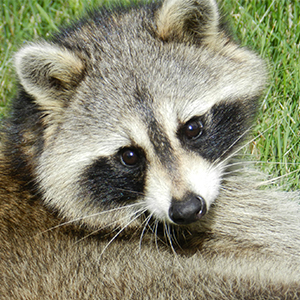 These primarily nocturnal creatures are usually not seen by homeowners, but their damage certainly is. Raccoons are a danger to both your landscape and the inside of your home. Raccoons will often travel high and low in search of food, including your yard and trash cans. Though their deceptively charming appearance might suggest they’re harmless, raccoons can be responsible for costly damage to your attic. Read more to learn about raccoons and why it’s important to keep them off your property. Give us a call at (817) 431-3007 for help with raccoon removal near you!

Raccoons can cause mischief in your garden, your yard, and your home. Some of the most commonly reported raccoon problems include:

How & Why to Get Rid of Raccoons

Raccoons are wild animals and some people may find it hard to disturb them in their natural habitat. However, when raccoons approach or enter your home or are too close for comfort, please do not approach them. Healthy raccoons are not friendly, so if a raccoon seems interactive, it is likely rabid. Rabid raccoons are incredibly dangerous to engage with, so we highly recommend calling a professionally trained raccoon removal specialist. Wildlife X Team® can safely remove and relocate raccoons and repair raccoon damage.

Did you know? Raccoons are known for their unique habit of washing their food when they are close to water; many believe that it helps raccoons determine what they're eating since their sense of touch is so powerful. However, raccoons will not pass up a tasty treat if there is no water around to wash it in.

Where Do Raccoons Live?

When raccoons mate, they have a relatively short gestation period of 9 weeks. During this time, they are looking for the perfect den to have their babies in. This can create a problem for homeowners. Your attic, crawlspace, or porch might be just the place they’re looking for.

Raccoons have babies one time per year. They mate in late winter to spring and have their babies anytime from March to September. Most raccoon babies are born in May. Mother raccoons prefer a dark and secluded area to have their 3-7 little babies.

If you suspect a raccoon has had their babies in your home, it’s important to call a professional. Mother raccoons will do anything to get back to their young, so if you remove the mother raccoon and accidentally seal the babies inside, she will most likely cause great damage.

What are the signs of a raccoon problem?

Because raccoons are so large, it’s hard to miss their presence in your home or yard! Common signs of raccoons include broken screens or vents, tipped-over trash cans, thumps in your attic, and large droppings. Raccoons will chew your wires and scratch your insulation. Raccoons are nocturnal, so you will likely hear or notice this activity in the evening hours.

How do I keep the raccoons from coming back?

One Wildlife X Team® removes the raccoons from your property, we will install prevention methods. This may include screening, caulking, and sealing of entry holes in your home. Other prevention methods you can easily implement include sealing off food sources like bird feeders, pet food, and open trash. We recommend an animal proof garbage can if you have frequent run-ins with raccoons.

How much does it cost to remove raccoons?

Each raccoon removal case is different. If you suspect you have a raccoon problem, our experts will evaluate your home using our exclusive Wildlife Inspection Report.

How do I know if a raccoon has rabies?

Common signs of rabies include difficulty walking, foaming at the mouth, aggressive behavior, and choking. If you suspect a raccoon has rabies, stay away from it and call Wildlife X Team® as soon as possible.