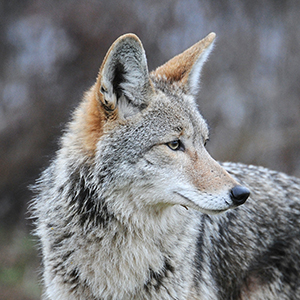 Relatives of wolves and domestic dogs, coyotes' natural habitats are slowly encroaching on human-inhabited areas. Their main threat is their propensity for attacking and killing livestock, especially chickens. They've also been known to injure or kill domestic pets.

Coyotes are known for being nocturnal, and their distinctive high-pitched yowls give away their presence on your property. If you hear the cries of these medium-sized dogs or have mysterious chicken deaths, call Wildlife X Team® at (817) 431-3007 today and our team will come deter the coyotes from your property!

What Do Coyotes Eat?

Coyotes are wary of humans—so much so that simply seeing a person will be enough to scare them away—so they do not get into homes often, and as such, their damage is primarily outdoors. However, if coyotes are in search of food, they often scavenge, which occasionally leads them into people's homes.

Despite the fact that they don't typically come near humans, coyotes are still a nuisance and shouldn't be approached. They may look like domestic dogs, but they are wild animals—their teeth are sharp and made to attack prey, and they won't hesitate to do so if they feel threatened. Coyotes are pack animals, like wolves, so where there's one coyote, there's likely several. Some common coyote issues you may encounter on your property include the following:

Do I Really Need to Worry About Coyotes?

You should be cautious about coyotes on your property, especially if you have a pet dog or cat, or livestock (especially poultry). You shouldn't attempt to control coyote populations yourself, though—this is a job for a professional wildlife removal team like Wildlife X Team®. We provide full-service coyote control, from removal to prevention. Call (817) 431-3007 today!

Offering
As Featured on These Networks & Affiliates
Affiliations:
About
Wildlife X Team is rapidly becoming the leader in the nuisance wildlife control industry. We lead the way in the development of technology, education, products and services in Wildlife Management.
Read More About Us
100% Financing
SuperMoney offers 100% financing up to $100,000 and 30 second approvals. You'll fill out one easy form and get competing pre-approved loan offers back in real time.
Apply Now
Wildlife X Team offers an exclusive Wildlife Inspection Report® which includes commonly overlooked areas where wildlife can enter and infest your home.
Project: Repair a Wood Shake or Composite Roof