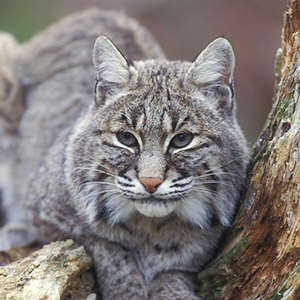 Bobcats are nocturnal animals, so contact with humans is very rare, but possible. These small wildcats are capable of taking down animals much larger than they are. They are good hunters and, like many wildlife creatures, will target domestic animals like pets and livestock. The best way to avoid bobcats is to prevent them from coming onto your property in the first place. Luckily, Wildlife X Team® can help! Call (817) 431-3007 today with bobcat removal and prevention questions and we will keep these dangerous wildcats away from your property and family.

All wild animals should be left to professionals to remove and address, so we do not suggest attempting to remove bobcats from your property personally, as they may attack. Bobcats are territorial and will often return to the property they have claimed as their own, especially if there is a steady food source. The trained professionals at Wildlife X Team® will help keep bobcats away, safely and quickly. Call (817) 431-3007 today!

The Bobcat is a medium-sized wildcat that is found in a variety of habitats across the southern half of North America. They are widespread and adaptable predators that are closely related to the larger and more northerly dwelling Canadian Lynx with the biggest difference being that the Bobcat only has a small “bobbed” tail, from which it gets its name. Measuring about double the size of a domestic cat, the Bobcat has the greatest range of all North American felines but their secretive nature means that they are seldom seen by people. There are currently twelve recognized sub-species of Bobcat which vary in their color and geographic range, with individuals found in mountainous forests being darker with more markings than their lighter-colored cousins that are found in more arid, semi-desert regions.

Due to the fact that the Bobcat belongs to the same family as the Lynx, they are similar in appearance but not at all the same. The Bobcat is smaller in size and has smaller feet and ear tufts than the Canadian Lynx, and often tends to be darker in color. Bobcats have beige to brown or reddish fur that is mottled or spotted with the intensity of these markings depending on the individual and where it lives (those found in more open, arid areas tend to have fewer markings than those found amongst dense cover). The underside of the Bobcat is white so the darker spots are more distinctive and they also have a white tip to their short, black tail, which only grows to around 15cm in length. Like the larger Lynx, the Bobcat has ear tufts that are thought to heighten their hearing along with also having a ruff of longer fur around its face.

The exact appearance of the Bobcat depends on what kind of habitat it is found as the differing coat colors allow the individual to remain as camouflaged as possible in its surroundings. The historical range of the Bobcat once extended right across North America but the capture of them for their fur and loss of their natural habitat has led to the disappearance of them in some areas.

The Bobcat is a solitary and nocturnal animal that is most active in the darkness of night, tending to hunt most during dawn and dusk. Bobcats are highly territorial and mark their ranges with scents from their urine and feces and distinctive claw marks on trees to alert others of their presence.

Bobcats can only be found together during the breeding season when both males and females can mate with multiple partners and after a gestation period that last for 8 – 10 weeks, the female Bobcat gives birth to a litter of up to 6 kittens in a safe and secluded den. Bobcat kittens are born blind and open their eyes after about 10 days, feeding on their mother’s milk until they are old enough to begin consuming meat. Most births occur in the late winter or early spring with Bobcat kittens usually remaining with their mother until the next winter when they are around eight months old and have learned how to hunt independently. Female Bobcats tend to have a single litter every year and after mating, the male Bobcat plays no part in rearing the young.

The Bobcat is a carnivorous feline meaning that it only hunts and eats other animals in order to gain the nutrients that it needs to survive. The Bobcat is an incredibly elusive predator that hunts its prey by stalking it silently in the dark before pouncing on it with incredible force, and despite their size, Bobcats are known to be able to kill animals that are much larger than themselves.

The vulnerable and small Bobcat kittens, however, are preyed upon by a number of predators including Coyotes and Owls that are able to hunt the kittens while their mother has gone off to hunt. The biggest threat to Bobcat populations throughout North America is people that have previously hunted the Bobcat to near extinction in some areas for their soft fur.

The Bobcat is also known as the Red Lynx due to the fact that the two are very similar in appearance but the Bobcat tends to be much darker and richer in color than their northern relatives. They are incredibly secretive yet powerful animals that are able to pounce on their prey from up to three meters away before delivering a fatal bite, allowing Bobcats to also hunt animals that may be up to double their own size. Bobcats are generally quiet and not greatly vocal animals, the fierce growls and snarls that they make when they are hiding often lead people to believe that there is a Mountain Lion in the area.

Bobcats have historically dominated a wide variety of habitats across North America with the Bobcat known to people all over the continent, having roots in Native American folklore and in tales of the first European settlers in the Northern USA and Canada. The beauty, softness, and density of the Bobcat’s fur lead to an increased value in their pelts and therefore the hunting of them from the early to mid-1900s that completely decimated populations particularly in the eastern and mid-western USA. Although they are now internationally protected, the hunting of Bobcats still continues in some areas, particularly those with the densest populations. They are also seen as pests by farmers that hunt Bobcats to protect their livestock, particularly in Mexico where it has led to the Mexican Bobcat being listed as an Endangered species.

Today, the Bobcat is listed by the IUCN as an animal that is of Least Concern from becoming extinct in its native environment in the near future. Since the international protection of the Bobcat in the 1970s put an end to the extensive trading of their fur, populations have been able to recover and are stable throughout much of their natural range.

Offering
Affiliations:
About
Wildlife X Team is rapidly becoming the leader in the nuisance wildlife control industry. We lead the way in the development of technology, education, products and services in Wildlife Management.
Read More About Us
100% Financing
SuperMoney offers 100% financing up to $100,000 and 30 second approvals. You'll fill out one easy form and get competing pre-approved loan offers back in real time.
Apply Now
Wildlife X Team offers an exclusive Wildlife Inspection Report® which includes commonly overlooked areas where wildlife can enter and infest your home.
Project: Apply Roof Sealant

Knowledgeable, efficient, and understood the issue to be addressed. Completed work on time and schedule.