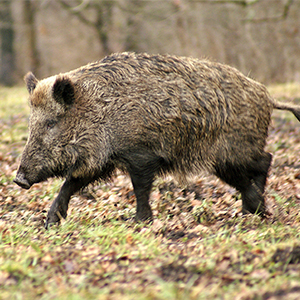 Wild hogs, also known as feral swine or wild pigs, are a large species of pig common in the wild in certain parts of the United States. They are primarily found in the Southern area of the country, but are found in California and also have a limited presence in the Midwest. If you are facing a wild hog problem on your property, please call Wildlife X Team® at (817) 431-3007 today for full-service wild hog removal and trapping!

You might be wondering "what kind of damage do wild hogs cause?" The major issues with wild hogs is the impact they have on agriculture, their aggression toward humans, and the diseases they can transmit to humans. Believe it or not, wild hogs are also responsible for a number of vehicular accidents on the road every year. Learn more about wild hog problems below.

Though they typically attack when they feel threatened, provoked, or hurt, occurrences of attacks are not incredibly common. However, wild hogs are capable of wounding humans with their razor-sharp tusks, which are actually teeth. Both genders of wild hogs utilize their tusks for defense, with a stabbing, slashing, or biting motion.

As a wildlife animal, the wild hog is host to a number of infectious illnesses including toxoplasmosis, tularemia, swine flu, hepatitis E, leptospirosis, and more.

A USDA study reported that feral swine are responsible for up to $1.5 billion in damage to crops each year in the US.

What Do Wild Hogs Eat?

Getting Rid of Wild Hogs

Wild hogs are game animals, and many people enjoy hunting them. Wild hog trapping and prevention are generally considered more effective, however, so we don't recommend DIY wild hog trapping—instead, call the professionals at Wildlife X Team®! We have many years of experience trapping these intelligent and dangerous creatures, so trust us to get wild hogs off your property for good! Call (817) 431-3007 today!

Offering
As Featured on These Networks & Affiliates
Affiliations:
About
Wildlife X Team is rapidly becoming the leader in the nuisance wildlife control industry. We lead the way in the development of technology, education, products and services in Wildlife Management.
Read More About Us
100% Financing
SuperMoney offers 100% financing up to $100,000 and 30 second approvals. You'll fill out one easy form and get competing pre-approved loan offers back in real time.
Apply Now
Wildlife X Team offers an exclusive Wildlife Inspection Report® which includes commonly overlooked areas where wildlife can enter and infest your home.
Project: Control or Eliminate Small Animals

Excellent company. When we heard sounds in the attic, they had one of their people here the same day. After giving us a treatment recommendation, he scheduled the service tech for the next day. Service technician arrived right on schedule and did a great job. Great service.