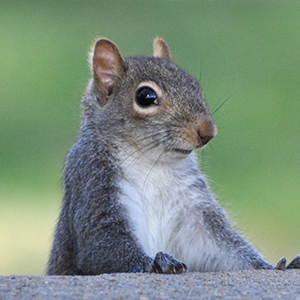 Squirrels are a common sight across the nation, both in urban and rural areas. They may taunt your pets and cause damage in your yard while burying nuts. If they begin to get too close to your home for comfort, we can help. In the event that squirrels get into your home, we can help with this, too. In certain states, squirrels are actually protected by law and considered game animals, so it's important to know your state's laws when it comes to squirrels. Make sure you are complying with laws and get effective squirrel removal—call Wildlife X Team® at (817) 431-3007 today to address any and all squirrel problems.

One of the most common squirrel complaints we receive is the damage they can cause inside your home—attics and inside walls are sought-after nesting areas for squirrels. Squirrels also:

How & Why to Get Rid of Squirrels

Squirrels are indubitably a nuisance—it seems like they're always scampering nearby. Leave the hard job of squirrel removal to the professional technicians at  Wildlife X Team®. Before you call Wildlife X Team® at (817) 431-3007, there are some DIY landscape steps you can take, including restricting access to birdfeeders and applying squirrel repellents to the area.

Squirrels belong to the order “Rodentia.” With 1,650 species, it is the largest group of living mammals. Rodentia also comprises 40% of all present-day mammal species. There are over 365 species of squirrels in seven families, including the tree squirrel, ground squirrel, and flying squirrel. Many squirrel-like mammals, like the gopher, groundhog, and prairie dog, are also in the same family as squirrels.

Squirrels often forget where they buried their acorns, resulting in the growth of many oak trees! Squirrels will also pretend to bury nuts or acorns if they suspect a thief is watching.

When squirrels are ready to have their babies, they are looking for a safe place to do so. Unfortunately, your home may be their perfect spot for that. Your walls, attic, or chimney may be calling their name.

Before you seal your home from squirrels, consider if there are baby squirrels inside. If you accidentally trap them in there, the mother squirrel will cause a lot of damage to your home trying to get the babies out, and the babies will die.

The period of squirrel gestation varies from 33 days in the smaller species of pine squirrels, up to 60 days for the larger species such as the common gray and fox squirrels. Squirrels are usually born in the early spring. The average litter consists of four squirrels, but this varies with climate and location.  A second litter can occur in mid-summer if there is an adequate food supply. A female squirrel will choose the strongest male during mating season but is unlikely to breed with that male again. This is nature’s way of reducing inbreeding and preserving the species. A baby squirrel weighs approximately one ounce at birth and is about one inch long. Baby squirrels do not have hair or teeth and are virtually blind for the first six to eight weeks.

Gray squirrels come in many colors and are the most common color of squirrels. Brown and shades thereof are the second most common. There are also pure white and pure black squirrels, but both are simply variations of the gray squirrel. Did you know the common red squirrel can actually have an all-black coat? The Kaibab squirrel, located in a small area of the southwest United States, has a black body with a white tail.

When Are Squirrels Active?

In the summer, squirrels are most active two to three hours after sunrise. They'll then rest in the afternoon, resuming activity again two hours before sunset. The squirrel will retire to its nest well before dark and will rarely leave the nest once it is dark. In the winter, the squirrel will complete its daily activities between dawn and mid-day and will remain in or around the nest until the next day.

Squirrels are most active in late winter when the mating season begins. The males will chase females, as well as chase off other suitors. You may be familiar with this ritual, which occurs through the trees at top speed, while they perform some of the most impressive acrobatics known in the animal kingdom.

What Do Squirrels Eat?

The gray squirrel's diet consists of nuts, seeds, and fruit. It will eat bird eggs, bugs, and even an animal carcass if there is no other food available. The gray squirrel requires some salt in its diet and may find this salt in the soil along roads where snow and ice may have been. Squirrels chew on tree branches to sharpen and clean their teeth; that’s why you may see many small branches on the ground around large trees. They will also chew on power lines for the same reason, which has caused many major power outages. A squirrel’s brain is about the size of a walnut. The average adult squirrel needs to eat about a pound of food a week to maintain an active life.

During winter storms, or severe cold, the squirrel may not leave the nest for days, but the tree squirrel does not hibernate! An adult squirrel normally lives alone but will, in severe cold, share its nest with other squirrels to conserve body heat. Squirrels' eyes are located high and on each side of their head. This allows them a wide field of vision without turning their head. If a squirrel has taken up residence in your attic or crawl space, the only practical way to remove them is by trapping.

How Do Squirrels Mark Their Territory?

A squirrel will break the shell of a nut with its teeth, and clean the nut by licking it or rubbing on its face before it's buried. This applies a scent to the nut, which helps the squirrel find it later—even under a foot of snow. A tree squirrel's sweat glands are located on their feet, between the feet pads, and on their paws between the toes. When hot or excited, a squirrel will leave wet tracks on a dry surface. This scent is also used to mark the trees in their territory. If a squirrel’s nest becomes infested with fleas or other parasites, it will move to or build a new nest. This explains why there may be more nests than squirrels in a given area.

Where Do Squirrels Nest?

Though the gray squirrel has been known to build a nest in many unusual places, an attic or crawl space seems to be the most common. Squirrels have also built nests in vehicles, chimneys, barbecue grills, and under porches.

How Do Squirrels React to Danger?

When a squirrel senses danger, its first instinct is to stand motionless. If on the ground, it will race to the closest tree or other climbable objects to escape. If it is in a tree, it will circle the trunk with its body pressed tightly to the bark. The squirrel’s erratic path while crossing a street is an attempt to confuse the oncoming vehicle, thereby causing it to change direction. Unfortunately, this is the squirrel's biggest—and often last—mistake.

Can I remove squirrels from my home by myself?

We don’t recommend tackling squirrel removal as a DIY project. Their nests can be difficult to locate, and you don’t want to come face to face with a disrupted squirrel in your attic or crawlspace. The experts at Wildlife X Team® can safely and humanely remove the squirrels from your home.

What are the signs of squirrels in my home?

Common signs of squirrels in your home include scratching, scurrying, and rustling. You may also see chewed wires, insulation, and more in your home. Squirrel droppings in your home are another sign of their presence.

Squirrels are active during the daytime, so daytime noises are a good indication of squirrels in your home. Common squirrel sounds include scratching, scurrying, and rustling.

What should I do if I find the hole the squirrels made in my house?

If you find the hole the squirrels are using to enter your home, call the experts at Wildlife X Team®. You don’t want to plug the hole while there are still squirrels inside. They will die in your home and cause a very bad odor.

How do you prevent squirrel problems?

You can prevent squirrel problems by keeping your home sealed. Often, homes have small entry points that need to be caulked, especially around doors and windows. Also, keep all food sealed and properly stored, including pet food.

Offering
As Featured on These Networks & Affiliates
Affiliations:
About
Wildlife X Team is rapidly becoming the leader in the nuisance wildlife control industry. We lead the way in the development of technology, education, products and services in Wildlife Management.
Read More About Us
100% Financing
SuperMoney offers 100% financing up to $100,000 and 30 second approvals. You'll fill out one easy form and get competing pre-approved loan offers back in real time.
Apply Now
Wildlife X Team offers an exclusive Wildlife Inspection Report® which includes commonly overlooked areas where wildlife can enter and infest your home.
Project: Repair a Wood Shake or Composite Roof