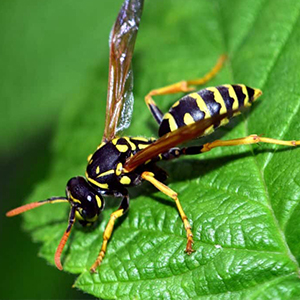 Most people have experienced a bee or wasp sting at some point in their lives. Not only are bees and wasps annoying, but they can be responsible for serious health complications when they come into contact with humans. Being stung can be dangerous if the stung person or animal is allergic, and unfortunately, bees and wasps have a tendency to get into homes. Stinging insect infestations are common on properties, so if you are facing a bee or wasp infestation, call Wildlife X Team® at (817) 431-3007 today to get rid of your problem quickly and effectively!

What's The Difference Between Bees & Wasps?

Bees and wasps are both members of the Hymenoptera order, which includes wasps, bees, and ants. The majority of the species in this order are solitary, and they're more likely to escape than to fight.

Social hymenopterans, including yellow jackets, honey bees, bumblebees, and fire ants have soldiers in the colony whose task it is to defend the nest. If the nest is disturbed, these individuals will defend the colony vigorously. Foraging members of the colony also will sting if they are disturbed as they go about their activities.

Some, such as the yellow jacket, are much more likely to attack than anything else. Africanized honey bees are closely related to the European honey bees, which are used in agriculture for crop pollination and honey production. The two types of bees look similar, and their behavior is similar in many respects. Neither are likely to sting you when gathering nectar and pollen from flowers, but both will sting in defense.

Offering
As Featured on These Networks & Affiliates
Affiliations:
About
Wildlife X Team is rapidly becoming the leader in the nuisance wildlife control industry. We lead the way in the development of technology, education, products and services in Wildlife Management.
Read More About Us
100% Financing
SuperMoney offers 100% financing up to $100,000 and 30 second approvals. You'll fill out one easy form and get competing pre-approved loan offers back in real time.
Apply Now
Wildlife X Team offers an exclusive Wildlife Inspection Report® which includes commonly overlooked areas where wildlife can enter and infest your home.
Project: Control or Relocate Birds or Bats