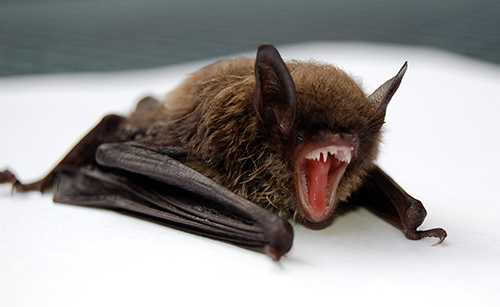 As one of the more unique-looking wildlife animals, bats are feared by many. These avian mammals can fly around your home erratically if they get inside, which is frightening. Bats are known for getting into cracks as small as a dime, and you can guess that there may be one or two of those located on your home's exterior! Once bats get into your home, they can cause all sorts of problems. Call Wildlife X Team® today at (817) 431-3007 for help with the bat removal and bat control processes!

The short answer is yes. Like other wildlife, if left alone, bats are not directly dangerous to your health, but if they encroach on your space, they become hazardous. The bat relocation and removal process is also best left to professionals, as bats will bite if threatened. Bats, despite their size, can cause severe damage, mostly in the form of unpleasant scents, but also in the form of structural damage.

If you are finding signs of bat presence on your property or if you spot one, or want to know how to get rid of bats from your attic and chimney, please call our Wildlife X Team® at (817) 431-3007 today. We can help you solve your bat problems permanently!

Where Can You Find Bats?

When Are Bats Most Active?

Bats generally have their babies by July. The babies, or pups, are born without the ability to fly, so the mother bat keeps them warm and nourished. It’s important to ensure you don’t accidentally trap baby bats inside your home that can’t fly when you're trying to seal your home from wildlfe. You don’t want to lock the mother bats outside where they can’t tend to the babies. If you suspect you have bats living in your home, call the professionals at Wildlife X Team® to evalue the situation.

Bats are a very important part of our ecosystem! However, bats can carry diseases. Common diseases that bats carry include histoplasmosis and rabies. Histoplasmosis is found in bat droppings and can cause illness by being near the bats.

When are bat problems most likely?

The most common time of year to have bat problems is during the warmer months of summer and spring.

Will a bat house on my property lure the bats out of my home?

Because bat houses are not a better option for the bat than your home, they will not leave to live in a bat house in your yard.

Offering
As Featured on These Networks & Affiliates
Affiliations:
About
Wildlife X Team is rapidly becoming the leader in the nuisance wildlife control industry. We lead the way in the development of technology, education, products and services in Wildlife Management.
Read More About Us
100% Financing
SuperMoney offers 100% financing up to $100,000 and 30 second approvals. You'll fill out one easy form and get competing pre-approved loan offers back in real time.
Apply Now
Wildlife X Team offers an exclusive Wildlife Inspection Report® which includes commonly overlooked areas where wildlife can enter and infest your home.
Project: Install Spray Foam Insulation

This company's installation saved us hundreds of dollars this past winter and summer. They did a superb job and cleaned up after themselves.